The Tonight Show with Jay Leno has a knack at finding “the funny” in folks and the show’s “Pumpcast News” segment takes the cake. This segment starts with a fictitious news anchor Jack Rafferty (actor Tim Stack) surprising drivers by asking them questions though a digital broadcast monitor, attached to the top of a gas pump, while they are pumping gas.


In this video Jack scares the heck out of Will Sims who is singing while filling up his gas tank. Jack, who notices Will humming, ask if he sings professionally. Will screams with surprise from the talking head inside the monitor, but quickly informs Jack that he only does Karaoke. After Jack ask a few more questions and request Will to sing, he belts out a rendition of Bon Jovi’s “Living’ on a Prayer,” all the while his wife is sitting in the car “splitting her sides” with laughter.


When Will completed his performance, Jack could not stop trying to stir up more action; therefore, he asked if Will and his wife, Monifa, would sing in a duet. Honoring Jack’s request, the couple sings the song “Sweet Dreams (Are Made of This)” by the Eurythmics.


Once Will and Monifa’s stellar performance was viewed by Jay Leno, he invited the couple to perform on the Tonight Show and again the they made folks smile.


This “Pump Gas” segment has made viral history and gets a “LHHG thumbs up!” 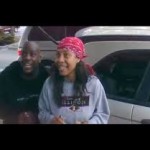 Will and Monifa Sims